International Rescue System Institute has been entrusted with research and development projects related to rescue systems, promoting these R&D activities through the industry, government and academia network.

2017 Project to achieve an energy saving society where robots and drones play an active role (NEDO)
This project concerns the “Implementation of International Standardization in Relation to Robots and Drones”, to understand the trend for international organizations and other foreign groups to promote standardization, and, through international cooperation, to advance investigations and developments, tying together these accomplishments with international standardization.
2016 – 2017 World Robot Summit – Studies into contests in the disaster field. (NEDO)
2016 Surveys towards accomplishing the World Robot Summit competitive event. (NEDO)
2014 – 2018 JST Impulsing Paradigm Change through Disruptive Technologies Program (ImPACT) “Tough Robotics Challenge” (TRC)
Impulsing Paradigm Change through Disruptive Technologies Program (ImPACT) is a Japan Science and Technology Agency (JST) program. It was established with the goal of generating innovative science and technology – which if realized could bring about a huge transformation in the nature of industry and society – and the promotion of high risk, high impact, challenging research and development.

The purpose of “Tough Robotics Challenge” is the actualization of remote controlled robots that are tough, tireless and reliable even in situations of extreme outdoor disaster where the conditions are unknown and can change from moment to moment. In the matter of research and development, IRS is responsible for research related to “field benchmark tests and verification tests”.

A JST project conducted in collaboration with the US and concerning “Science and technology to realize a safe and secure society”. Specifically, science and technology which can deal with natural disasters, crime, terrorism, disease, and other social vulnerabilities. International Rescue System is cooperating in research in the field of robotics, with the subject “US-Japan Research Collaboration in Disaster Response Robotics”. After the Great East Japan Earthquake in the spring of 2011, the knowledge and collaborative research gained through this project was used in robots deployed to the disaster site.

2006 – 2011 FDMA: Promotion of Research into Technology for Fire-Fighting and Disaster Prevention

A system implemented by the Fire and Disaster Management Agency (FDMA), to advance research into fire-fighting technology that can ensure a safe and secure society. IRS is currently conducting research and development into “Improvements and Field Tests for the Practical Use of the Active Scope Camera”.
◆Previous Project Reports
“Development of Techniques for Locating Victims Buried in the Rubble of Buildings etc., which have Collapsed in an Earthquake.”
“Development of Hydraulically or Pneumatically Driven Tools for Search and Rescue.”

2006 – 2011 Project to Develop the Underlying Technology for Strategic, Cutting-edge Robotics
A NEDO project promoting the development of underlying technology for cutting edge robotic systems. Within the “RT Systems Operating Within Disaster Struck Buildings”, (3) Robots for Use in Specialist Environments, International Rescue System Institute carried out the research and development of multi-mobile RT Systems which can rapidly collect information about humans stranded in dangerous locations, such as plant accidents, NBC terrorism, gas leaks and other hypothetical disasters. One of the robots developed, “Quince”, was used for surveying and monitoring the conditions inside Fukushima Daiichi Nuclear Power Plant.
2007 – 2009 Project to Develop Next Generation Intelligent Robotic Technology
A NEDO project promoting development of the intelligent technology necessary for enhancing facilities, and aiming to establish underlying technology needed for independent next-generation robotics. International Rescue System Institute carried out the research and development “Intelligent Motorized Mobility Systems Combining Automation and Operation”, as part of the development of intelligent mobility (in social and lifestyle areas).
2006 – 2007 A Ministry of Economy, Trade and Industry (METI) R&D Project for the Regional Revitalisation Consortium.
A METI venture for the development of regional technology, with the aim of implementing advanced R&D for practical use. This project was carried out under Industry-Academic-Government’s stable collaborative research structure (Regional Revitalisation Consortium), in places that implement the expertise and seeds of technology (such as universities), to generate new industry and projects, and devise ways to stimulate the local economy. Within this venture, International Rescue System Institute’s Kobe Laboratory carried out the arrangements for the entire project “System for the Prevention of Disasters and Crime by means of RT Applied Mesh Net Sensor. (Kansai Bureau of Economy, Trade and Industry)”
2002 – 2006 Osaka City Special Project for the Reduction of Earthquake Disasters, Ministry of Education, Culture, Sports, Science and Technology (MEXT).
The “Osaka City Special Project for the Reduction of Earthquake Disasters” was one of the urban regeneration programs started in 2002 by MEXT. A R&D project spanning 5 years, with the aim of developing technology to rapidly reduce the harm caused by earthquakes occurring in metropolitan areas (such as the Great Hanshin Awaji Earthquake, 1995). 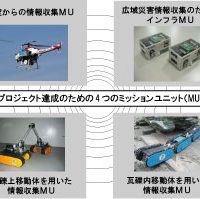 In a subproject called “III. Optimisation of Strategies to Deal with Disaster (Victim Rescue), 4. Development of Next Generation Disaster Prevention Based Technology such as Rescue Robots.”; International Rescue System Institute carried out R&D, such as Robot Intelligent Sensor Ubiquitous Terminal Human Interface, that aims to support the search for missing persons, collection and transmission of data etc. for emergency disaster relief (lifesaving etc.) in earthquakes.
For example, promoting the research and development of technology, such as robots, which can be brought in and mobilized in disaster struck environments which are dangerous for humans to enter, enabling the effective search for bodies and collection of data. By making the search and collection of information in places such as collapsed buildings of underground areas possible, this research has served the purpose of preventing secondary disasters harming people like firefighters.
It also tackled research and development into technologies such as robotic and ubiquitous terminals, and scattering based sensors that collect and integrate data from affected areas to aid rapid decision making at times of disaster. By mapping the disaster’s data and collecting information in real time, this research, besides monitoring the disaster’s situation, uses simulations to enhance the accuracy of predictions for how damage will progress, and supports decision making in the mobilisation of rapid response teams.
2005 – 2015 Project to Promote Kobe’s RT (Robot Technology) Vision
As part of “Kobe’s RT Vision” promoted by Kobe city, International Rescue System Institute, in conjunction with the advancement of research and development such as rescue robotics, has also carried out the following work.

Project to generate innovation – “Society in population decline x Manufacturing technology”
Putting excellent manufacturing technology to use, beginning with the robotic technology of medium to small companies in Kobe, and acting as a consultant for the research, prototype development, and production of devises instrumental in solving issues, such as labour shortages in certain spheres due to the problem facing Kobe city of low birth rates and a growing proportion of elderly people.

Urban Regeneration Project: Formation of a robotics industry for livelihood support based in the Osaka area.

Recent years have seen the frequent occurrence of natural disasters such as earthquakes, typhoons, floods and heavy snow. Then, there are the endless man-made disasters including accidents at nuclear power plants, terrorism and train derailments. Even when rescue efforts are attempted, there is the danger of a secondary disaster, and we must put the safety of these rescue teams first.
At International Rescue System (IRS), research and development into rescue robots that can replace humans in finding victims trapped in debris and gathering information at a disaster site, is progressing. In order to implement a rescue robot system, we believe it is necessary to construct a single system to unit this cutting-edge technology with emergency relief teams throughout Japan.

However, many current robotic systems are lacking practical experience. At IRS, we have repeated demonstrations and drills alongside firefighting officials and local governments. Development is progressing even further towards implementation in actual disasters, with feedback from teams analyzing the robotic systems for efficiency and usability.

In Japan, a country that leads the world in both natural disasters and in robotics, imagine a rescue team heading to a disaster, equipped with a robotic system, and being at the front line freeing victims from the rubble. Here, IRS-U is working tirelessly to make this a reality.

2) Participation in the training of rescue robots for real-life emergency situations.

The above are planned and managed by IRS.